Talk about the Clod Buster, and all other motor on axle trucks here.
39 posts

The Kyosho Raider Pro was my first (non radio shack) one, thats the stickers that came with it cept the box art was white. I got my old wing LEDs working tonite. Unfortunately the gold shocks are leaky so they will probably get replaced. I think I got every hop up back in the day (and it was an entry level car) but have now spent far more than it is worth making it run again 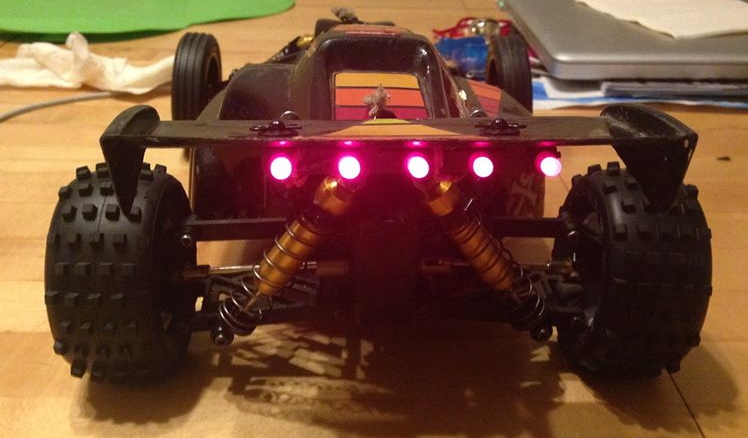 For those awesome people who run stock stuff, is there:

1 - anti sway bar? My shock setup is now soft, but that means the whole thing leans.

2 - wheelie bar? Keeping the red bumpers is a requirement so most wheelie bars I have seen won't work.

3 - slower speeds? I have SV3 + 4600kv on 2s. I don't expect crawling speeds, but my minimum speed is faster than walking. Hoping for an electronic solution instead of a mechanical one, but dropping top speed is fine so maybe I need different gearing, lower kv, or brushed.
Top

I think you'd be better off to use a less powerful brushless system.
Alternatively, I was using a traxxas XL-5 with an HPI thinderbolt 15T brushed motor in the little tamiya buggy I had not too long ago and it was decently quick with lots of low end smooth control.
Top

In case I was being confusing, those 3 questions were for my Clodbuster, not the Raider

bunnyboy wrote:In case I was being confusing, those 3 questions were for my Clodbuster, not the Raider

I forget if you ever read my super stocker thread, but I put sway bars on that, and that was with stock ladder bars.
I had a castle esc in it, which ran the stock motors on a 3S lipo.
Top

Had to reread that thread but I remember that sway setup now. I have a 3s batt but don't think I want to go back to stock cans.

I got those cool red rc4wd rod ends to get rid of some steering slop, but I got the short ones so they don't work

Also noticed my back bumper mounts have almost ripped off the body so I need wheelie bar more than I thought!
Top

I thought the wheelie "skid" worked the best.
Top

Punched a body mount right through the body, back tailgate cracked in half, maybe its time to retire that one! I am thinking of going grave digger, and maybe back to plastic body mounts so they flex more. Need to measure if 1/10 or 1/8 would look better.
Top

bunnyboy wrote:Punched a body mount right through the body, back tailgate cracked in half, maybe its time to retire that one! I am thinking of going grave digger, and maybe back to plastic body mounts so they flex more. Need to measure if 1/10 or 1/8 would look better.


Yeah, those mounts are only good for a shelfer. If you had the stock mounts, I think your truck would have faired better.

It sucks that you busted it up, that was a cool paint scheme.

It's back! I decided on repairs, because anything new would get destroyed too

Shoe Goo on plexi sheet to the underside of the bed and inside of tailgate, with all the screws going through it. Returned to plastic body mounts and drilled new holes to account for the thicker body. Still need one more bracket between tailgate and body but its back and so far has survived more crashes. My brother got the Vaterra Twin Hammer so he is setting up crawling obstacles and I bounce over them with my high minimum speed

Also got the wheel wideners which make a pretty big difference for higher speed turns (when the screws aren't coming loose). Need to do proportional steering or something for more control. First degree of movement on transmitter is way too many degrees on wheels.
Top
39 posts